This morning a pic showed up in my timeline that I had hoped not to see again. But it seems the pic has gone viral and is used out of context numerous times. It was a picture from the Agile Testing Days Scandinavia keynote “Why we do not need testers on the team” by Bent Myllerup to demonstrate the concept of an agile approach to software development, delivering value more often and developing software iterative and incremental. 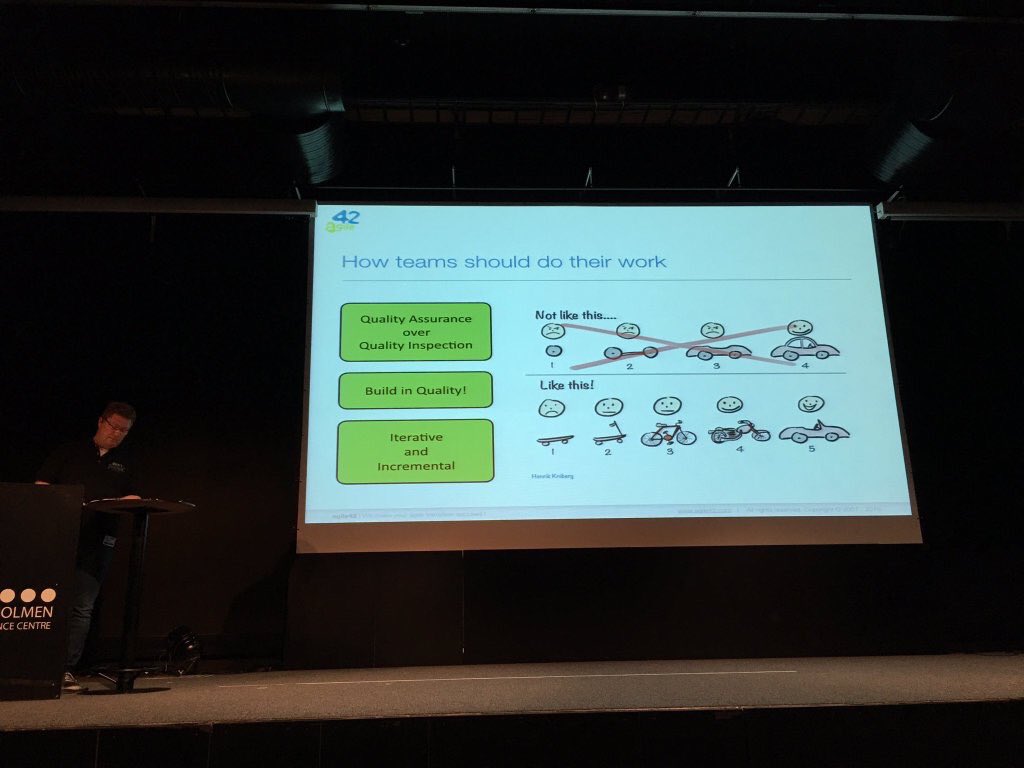 Let me describe what I see in this picture, and why I think it’s the wrong picture to describe the concept of MVP (the minimum valuable product). My problem is with the right part of the slide.

This picture is made by Henrik Kniberg and described in this blog. Henrik is also stating that his picture is used often, and not always in the right context. So why do I think that this picture is not showing what it should?

The upper part: For me it looks like that the customer wants a car. Somehow he gets multiple deliveries, while the product is built. I’m not sure, why would you deliver a partial product that’s unusable. But this picture should show the advantage of Agile, so I accept it as a stupid exaggeration for the sake of context.

The lower part: This picture should describe the principle of iterative and incremental development with multiple deliveries bringing (some) value to the client early to gather feedback and deliver the right product in the end. But now comes the problem of using manufacturing comparisons for software development; they usually don’t work. When software is built incrementally, you don’t need to start over after a delivery, and the part that was delivered must not be completely redesigned. In this example the customer gets 5 different products. But the second is not based on the first, the third not on the second and so on. This is an example of poor understanding of the needs of the client. This could either be that the client doesn’t know what he wants, and we slowly find out together what he wants, with an enormous effort to generate five different products. Or we were not able to ask the right questions and get additional information only by delivering something wrong to get more clues on what the client wants.
In the first case at least the client has to pay 5 different products, I suppose. In the second I presume we deliver five products for the price of the last one, which would not bring us enough money for all the effort we had.
I can imagine one scenario where this is absolutely valid. When you are a salesman of a company offering those five products and a customer comes in and doesn’t know what he wants, he can present him five different solutions, until the customer found what he wanted. But this is not Agile! And it does not apply to software development either, at least not if you want to stay in competition tomorrow.

So let’s look at different situations what a “minimum valuable product” is, and how you come from there to offer the client what he really wants. The scenarios I want to look at are:

MVP for one customer

A customer comes to us with a problem (or multiple) to solve. Asking the right questions we could find out what the customer most obviously wants to have. We find out what the most basic thing might be to solve a part of the problem. Then start off in that direction and showing him our first throw. The customer then can tell us, if that goes in the right direction or if we need a course change. We adjust and add value to the product as we go on, until the customer really gets what he want.

I like Cassandra Leung’s approach for that to find a real live example: 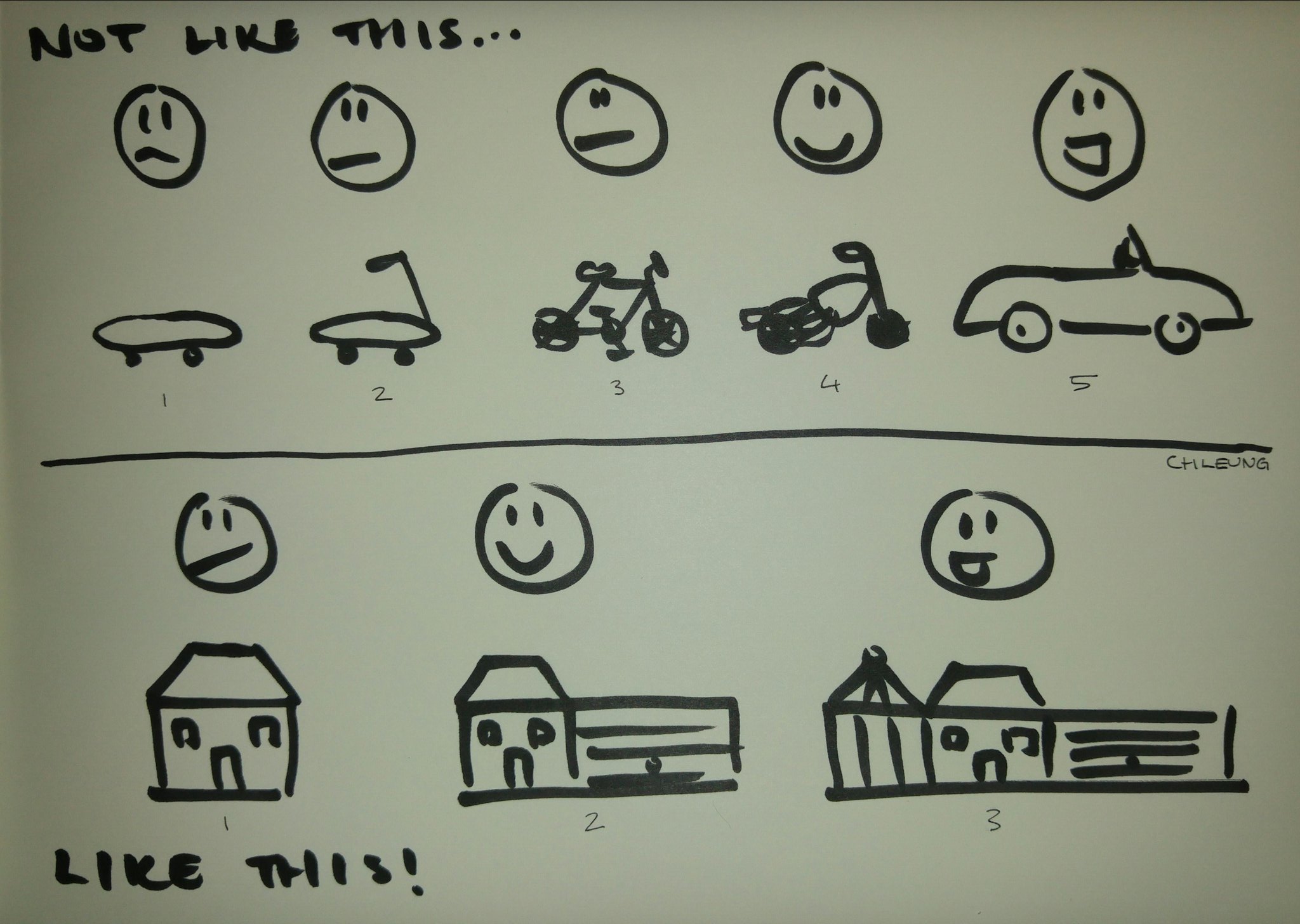 MVP for a couple of customers

Let’s assume we have a couple of customers who share a similar problem. Our task would be to ask enough questions to all of them to find out about what parts of the problem they have in common, what parts are shared by some of them, and which parts are unique to some customers.

Our MVP in this case would start with providing some basic value of the common part, so that all customers could benefit from it. Getting feedback we sharpen the understanding for the problems of our customers and how to solve parts of the problems in a common way and where we need to start focusing on solving problems differently for some of them. Developing features now after customer directions might also influence some of the customers, showing them different approaches how to solve their problem. This might bring value quicker to them and also influence the desire for the final solution.

An example would be special business software, focusing e.g. on one branch of the industry, where multiple market participants share a common problem to be solved.

MVP for many customers

This is more like looking for a new product that many customers would want to use. So you need to find a common problem for them to be solved. Since there are too many market participants to ask, you better get a product owner who knows his business and has a good understanding and overview of the problem at hand. Now we start much like solving a problem for only one customer. When we bring the MVP to the mass market we start getting feedback from “many”, if our solution is serving the many or not. Based on a vision or on feedback from the customers you now start adding features, continuously collecting feedback from the users. When the product grows you might start developing features that add value to only parts of your clients.

You should not shy away to remove features, if they are not used enough. Features cost money to maintain, and if they bring no or not enough value to your customers, get rid of it again. You might also learn that your MVP is solving problems you hadn’t had in mind, when you were starting to develop it. Then it’s good to have early feedback to change your course and address a different group of customers.

A real live example would be e.g. a text messenger for smartphones. SMS were expensive, but internet data connections were cheap compared to that. So text messengers using the internet were coming up. Then adding feature by feature, like sending pictures, voice bits, videos, etc. Some features are not used by all, some more often, some less, some are removed again, when they flop.

One example to show how MVP development works in non-software industries, car manufacturers. It all started with Ford’s model T. There was one kind in the beginning, then slowly starting to evolve for different problems to be solved. One company that accompanied me all my life is Audi. When I was young there were about three different models. A small medium (80), a big medium (100), and a big model (200 / V8), which then became A4, A6, and A8. Something to find for most people. Then people were looking for smaller cars and Audi wanted to have those customers as well, the A3 came. Then they invented something even smaller with the A2 and something sporty with the TT. Then the palette increased on the small end with the A1, and sporty versions in the medium to large segment with the A5 and A7. Not speaking about adding cabriolets and station wagons in most segments. 2- and 4-door versions. In the meantime SUVs came up, starting with the Q7, later came the Q3 and Q5 to present small and medium-sized SUVs. It took a couple of decades, but now most customers find something to solve their problems (taking into account the size of your purse of course). And it all started with a single model. But Agile is not a solution here, because you don’t want to have half a car.

9 thoughts on “MVP or not?! – A misunderstood pic goes viral”